AlgaeCal Studies One of the things I have dedicated myself to do on this Osteopenia3 web site, is provide you with scientific studies for any and all topics discussed. So here are some  AlgaeCal studies and they are impressive.. 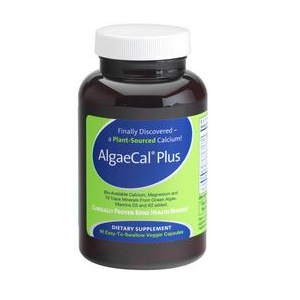 For many years the manufacture of this supplement listed testimonials on their web site. Although testimonials are interesting and are widely used in marketing, we need to remember that ‘proof is in the clinical test results’.....not testimonials.

But AlgaeCal now has several impressive studies published in scientific journals (and indexed on PUB MED - the US National Library of Medicine National INstitutes of Health.

1. Bioavailability of this supplement. The study compared the product with Caltrate 600, a popular calcium supplement that has been rather widely advertised in the media. In this study AlgaeCal’s bioavailability was found to be 75% while Caltrate 600 was 69%. This is an impressive result.

This study  followed 3 groups of post menopausal women over a 3 year period.  At the beginning there were no significant differences between the women in the 3 different groups. Subjects following all three plans had an increase in MAPC: Plan 1=1.30%, Plan 2=2.00%, and Plan 3=4.1%. As you can see, thos following Plan 3 [Plant based calcium as found in AlgaeCal] had the best results.

The study concludes: "This study found that following any of the three Plans was associated with increases in BMD as opposed to merely slowing down the decline in BMD, which had been the general conclusions from a wide range of studies on the efficacy of vitamin D and calcium supplementation.

These increases occurred without adverse side effects. While the study also provides evidence of the benefit of adding the physical activity and health literacy components, the data also support the efficacy of plant-source calcium as a stand-alone product." You can read the complete study at:  AlgaeCal Studies

Click on the link if you want to purchase AlgaeCal supplements,

Calcium is an essential mineral to support bone health and serves as a major  therapeutic intervention to prevent and delay the incidence of osteoporosis. Many individuals do not obtain the optimum amount of calcium from diets and depend on bioavailable calcium supplements. The present study was conducted to  examine the effect of a novel plant-based calcium supplement (AlgaeCal) , derived from
marine algae, and contains high levels of calcium, magnesium, and other bone supporting minerals [commercially known as AlgaeCal (AC)], on proliferation, mineralization, and oxidative stress in cultured human osteoblast cells, and  compared with inorganic calcium carbonate and calcium citrate salts. Cultured  human fetal osteoblast cells (hFOB 1.19) were treated with AC (0.5 mg/ml, fixed  by MTT assay), calcium carbonate, or calcium citrate. These cells were harvested  after 4 days of treatment for ALP activity, PCNA expression, and DNA synthesis,
and 2 days for Ca(2+) deposition in the presence and absence of vitamin D3 (5 nM).

The ability of AC to reduce H(2)O(2) (0.3 mM)-induced oxidative stress was assessed after 24 h of treatment. ALP activity was significantly increased with AC treatment when compared to control, calcium carbonate, or calcium citrate (4.0-, 2.0-, and 2.5-fold, respectively). PCNA expression (immunocytochemical analysis), DNA synthesis (4.0-, 3.0-, and 4.0-fold, respectively), and Ca(2+) deposition (2.0-, 1.0-, and 4.0-fold, respectively) were significantly increased in AC-treated cells when compared with control, calcium carbonate, or calcium
citrate treatment. These markers were further enhanced following additional supplementation of vitamin D3 in the AC-treated group cells. AC treatment significantly reduced the H(2)O(2)-induced oxidative stress when compared to calcium carbonate or calcium citrate (1.5- and 1.4-fold, respectively). These  findings suggest that AC may serve as a superior calcium supplement as compared to other calcium salts tested in the present study. Hence, AC may be developed  as a novel anti-osteoporotic supplement in the near future.

Go to Other Calcium supplements