Osteopenia dried plums for stronger bones  -  even if you have Osteoporosis

Osteopenia dried plums belong in your diet. Even more so if you have Osteoporosis.

Yes, you read that correctly. Those dark, wrinkled fruits found on the grocery shelves next to raisins and dried apricots can improve your bone density!

The research about Osteopenia dried plums (prunes) began in 2001 when scientists at the University of Illinois in Chicago published a paper about the growth, chemical composition and possible health uses of of Dried Plums or Prunes.

The articles gives the history and composition of dried plums. Near the end they mention a number of health conditions that Dried Plums/ Prunes might alleviate.

Here are the three paragraphs from their abstract:

“Prunes are dried plums, fruits of Prunus domestica L., cultivated and propagated since ancient times. Most dried prunes are produced from cultivar d'Agen, especially in California and France, where the cultivar originated. After harvest, prune-making plums are dehydrated in hot air at 85 to 90 degrees C for 18 h, then further processed into prune juice, puree, or other prune products. ... Because of their sweet flavor and well-known mild laxative effect, prunes are considered to be an epitome of functional foods, but the understanding of their mode of action is still unclear.

Dried prunes contain approximately 6.1 g of dietary fiber per 100 g,. . Prunes are good source of energy in the form of simple sugars, but do not mediate a rapid rise in blood sugar concentration, possibly because of high fiber, fructose, and sorbitol content. Prunes contain large amounts of phenolic compounds (184 mg/100 g), mainly as neochlorogenic and chlorogenic acids, which may aid in the laxative action and delay glucose absorption. Phenolic compounds in prunes had been found to inhibit human LDL oxidation in vitro, and thus might serve as preventive agents against chronic diseases, such as heart disease and cancer. 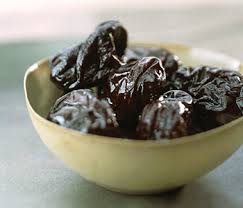 Additionally, high potassium content of prunes (745 mg/100 g) might be beneficial for cardiovascular health. Dried prunes are an important source of boron, which is postulated to play a role in prevention of osteoporosis. A serving of prunes (100 g) fulfills the daily requirement for boron (2 to 3 mg). More research is needed to assess the levels of carotenoids and other phytochemicals present in prunes to ensure correct labeling and accuracy of food composition tables in order to support dietary recommendations or health claims. "

I found this to be amazing information!

Researchers at Oklahoma State University,  USA took up the call for more research and they have published a series of articles about Osteopenia dried plums.

Like most studies on bone loss, they began with rats. First they studied female rats whose ovaries had been removed and who already showed bone loss. Then they studied male rats who were deficient in gonadl hormones and had bone loss as a result.

The study of the females rats is most interesting because it showed a reversal of trabecular bone loss " dried plum improves trabecular microstructure of tibia after (bone) losses have already occurred."

For the male rats they found "..that dried plum prevents osteopenia in androgen deficient male rats."

"These were randomly assigned to consume either 100 g dried plums or 75 g dried apples daily for 3 months. Both dried fruit regimens provided similar amount of calories, fat, carbohydrate, and fiber. Serum and urinary biochemical markers of bone status were assessed before and after treatment. "

The researchers in this study about Osteopenia dried plums found:

"Only dried plums significantly increased serum levels of insulin-like growth factor-I (IGF-I) and bone-specific alkaline phosphatase (BSAP) activity. Higher levels of both serum IGF-I and BSAP are associated with greater rates of bone formation. Serum and urinary markers of bone resorption, however, were not affected by either dietary regimen. The results of this study suggest that dried plums may exert positive effects on bone in postmenopausal women."

But there is more about Osteopenia dried plums

In 2006 scientists at College of Human Environmental Science published a study in the journal, Bone that showed "Dried plum prevents bone loss in a male osteoporosis model via IGF-I and the RANK pathway."

In 2009 The journal Aging Research Review  offers another article about Osteopenia dried plums. This  article was written by researchers at the Department of Nutrition, Food & Exercise Sciences, Florida State University.

The abstract of this articles state, in part,:"... As the demographic shift to a more aged population continues a growing number of men and women will be afflicted with osteoporosis and a search for potential non-pharmacological alternative therapies for osteoporosis is of prime interest. "

Aside from existing drug therapies, certain lifestyle and nutritional factors are known to reduce the risk of osteoporosis. Among nutritional factors, recent observations suggest that dried plum, or prunes (Prunus domestica L.) is the most effective fruit in both preventing and reversing bone loss. " (Italics mine)

""Animal studies and a 3-month clinical trial conducted in our laboratories have shown that dried plum has positive effects on bone indices. The animal data indicate that dried plum not only protects against but more importantly reverses bone loss in two separate models of osteopenia" [emphasis is mine]

So Osteopenia dried plums treatment seems to be good news. Dried plums (Prunes) are available in most supermarkets. They are relatively inexpensive.

If you like dried plums, eat them up...they appear to restore your bone density. And if you find that 100 grams a day proves to be have too much of a laxative effect, then cut back on the amount. But dried plums are a sweet treatment to add to any bone density diet. You can buy them at Amazon by clicking: