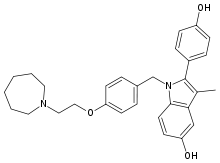 Osteoporosis drug Bazedoxifene - Conbriza, Duaveetm  was approved for use in the European Union in 2009 and in the United States in October 2013.

In an article by Kung, Chu and Xu published by Expert Opinion on Pharmacotherapy as early as June 2009 the authors said that this SERM has"demonstrated estrogen agonist effects on the skeleton and lipid metabolism but not on breast and uterine endometrium. . . . " Phase III clinical studies have shown favorable effects on the skeleton without stimulation of endometrium and breast.

In women at high risk of fracture with multiple risk factors, bazedoxifene reduces nonvertebral fracture risk in post-hoc analysis. Bazedoxifene in combination with conjugated estrogens represents a new form of therapeutic agents for the treatment of postmenopausal symptoms and prevention of postmenopausal osteoporosis. Clinical trials with bazedoxifene/conjugated estrogens have shown beneficial effects on bone mineral density and bone turnover markers with improvement in vasomotor symptoms and little or no stimulation of breast and endometrium."

At the 20th 20th Annual North American Menopause Society Meeting in October 2009 offered reference to the Osteoporosis drug Bazedoxifene. It was noted that "Bazedoxifene 20 mg or bazedoxifene 40/20 mg daily was a safe, effective treatment for osteoporosis in postmenopausal women, according to phase 3 study results presented here.

Researchers enrolled 4,216 participants in an extension study (years four and five). The raloxifene group was discontinued in year four and women who received bazedoxifene 40 mg were transitioned to bazedoxifene 20 mg at the end of year four. Transvaginal ultrasound data were available for 176 women at baseline and at five years (bazedoxifene 20 mg, n=60; bazedoxifene 40/20 mg, n=58; placebo, n=58).

Overall safety and tolerability findings of the Osteoporosis drug Bazedoxifene at five years are encouraging and consistent with those seen in the three-year core study, according to the researchers.

The incidence for uterine bleeding, ovarian cysts and benign breast disease was similar among all groups; the number of women with breast cancer was similar with bazedoxifene 20 mg (n=10), bazedoxifene 40/20 mg (n=9) and placebo (n=10).

LDL effects of this drug

"In the osteoporosis study mentioned above, serum concentrations of low-density lipoprotein cholesterol decreased significantly compared with placebo at all doses of bazedoxifene, an effect similar to that of raloxifene.4 Serum concentrations of high-density lipoprotein (HDL) cholesterol were higher with bazedoxifene doses of 10 mg and 20 mg relative to placebo, but not with 40 mg where the trend was for a drop in HDL similar to placebo and raloxifene. Serum triglycerides also increased with bazedoxifene doses of 20 mg and 40 mg, with no reported cases of pancreatitis."

So, it could be that this drug could have dual uses: both for bone density and as a cholesterol loweringagent.


Side effects Researchers at the Department of Internal Medicine, Endocrine-Metabolic Sciences and Biochemistry, University of Siena, Italy published a study that included reference to side effects of the Osteoporosis drug Bazedoxifene.

Their abstract said that in their study, which compared bazedoxifene, raloxifene and a placebo, the most common reasons for discontinuation were similar in all three groups.

NOTE: As additional information about the Osteoporosis drug Bazedoxifene becomes available, I shall make note of it in our monthly newsletter.

If you want to keep up with the latest news and get tips about things you can do to help reverse your boneloss, do consider subscribing. It is a FREE service. Click on: Osteopenia Newsletter