Cause of Osteopenia Genetics

A primary Cause of Osteopenia Genetics . This is the first cause we should consider when we are trying to figure out why we have 'thin bones'

We have known for a long time that genetics is involved as a cause of Osteopenia (thin bones) as well as in the more severe form of bone loss, Osteoporosis. Both these conditions run in families.

Even before the advanced genetic studies of recent years, medical science knew about a genetic predisposition and that it is the `strongest predictor'  of who does and does not develop Osteopenia or Osteoporosis. 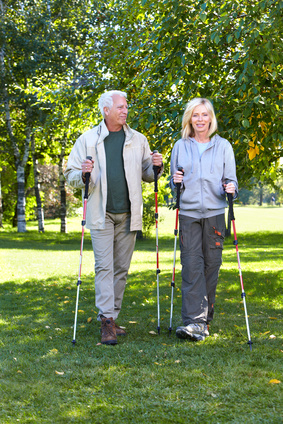 In some ways it is obvious. Think about your family: your mother, father, grandparents on both sides.... maybe even your aunts and uncles. You will notice that certain 'body types' seem to run through the generations.

At family gatherings there is often talk about who the children 'take after'. But this is not just about eye color or the shape of someones' face. Some children take after family members with thick, heavy bones. Others have a thinner or lighter frame.So a Cause of Osteopenia Genetics plays out even in such simple ways.

If your genetic inheritance is thick, heavy bones, you are less likely to develop Osteopenia or Osteoporosis than someone who starts off with thinner bones. If you have slight skeletal structure to start with you may develop 'thin bones' in your later years. This is one way that the Cause of Osteopenia Genetics works.

When I go into New York City, I am often struck that some people come from native stock that has compact, sturdry bodies.  Others are slight with thin bones. Even very tall people vary. Some are long and their bone structure narrow. Others are just as tall but their bones are big and heavy. So  a Cause of Osteopenia Genetics becomes clear.

Think about your own family members and their appearance.  Don't pay attention to weight. Think only of their bones!

ASIDE: I recently read an article that noted that Osteoporosis is less common in Mexico than in the United States. At the time I recalled that a great number of Mexicans of Indios descent are short and stocky and have a heavy bone structures. Of course there are other factors. It is well known that those living closer to the equator seem to have less Osteopenia than those living above the 43rd parallel because of their exposure to the sun and its relation to Vitamin D. And Mexican culture includes more physical exercise than that of North Americans etc. And daily diet counts too. But the point about bone structure is important. What we begin with, sets the basis for the rest.

After age 35, we begin to lose more bone than we normally make. It is natural that those with thick, heavy bones will normally have greater bone mass at this juncture and so they should fare better than those who inherited thinner bones. This is one way that Genetics is a cause of Osteopenia or Osteoporosis.

Other Cause of Osteopenia Genetics  connections

In recent years scientists have been able to isolate and study some specific genes. This is an important and exciting development for those interested in preventing and treating bone loss.

We now know, for example, that some of us have a genetic composition that interferes with our processing Vitamin D from sunlight. Since Vitamin D is essential in the process of using calcium from food or supplements to make bone. This genetic discovery is important.  If we know that we have this genetic marker, it could be that greater Vitamin D supplementation would be useful.

Let's look at some of the science behind Cause of Osteopenia Genetics.

John E. Eisman, a researcher in New South Wales, Australia has summarized many of the known genetic factors that are believed to be a Cause of Osteopenia or Osteoporosis in his article, "Genetics of Osteoporosis".

". . . genetic factors playing a major role in inherent bone structural characteristics and skeletal size and that these heritable effects are already programmed before puberty. Recent studies. . .suggest that a significant part of the heritability is related to shared genetic contributions to skeletal size and body composition. . . in several . . . studies 50–80% of the age-related variability of bone phenotypic parameters appeared to be genetically determined."

He also states that studies of twins conclude that:

"Analysis of these data suggests that 75–80% of the variance in bone density in individuals matched for age, sex, and general health is genetically determined." So your genes have a lot to do with your bone density.

What genes are relevant as being a Cause of Osteopenia?

The VDR gene and collagen I{alpha}1 gene polymorphisms are associated with levels of bone density. But recent studies indicate "that a large number of other genes with modest effects and possibly some major effect genes remain to be identified. Several studies suggest that other genes involved in homeostasis of bone density, including potential regulators of bone cell function and calcium homeostasis, may be determinants of bone phenotype."

The work related to genes as a Cause of Osteopenia is still in progress. But it is quite clear that some of us are by our family inheritance more likely to have thick strong bones, build new bone more easily and lose bone more slowly. For others of use it is the reverse.

What does this mean for you?

Some people assume that having a Cause of Osteopenia Genetics is a condemnation - that there is nothing they can do to prevent or remedy excessive bone loss. This is NOT true. Having a predisposition is not the same as actually having a disease or health condition. Example. Given my genes I have a predisposition towards developing diabetes. It runs in my family.

But realizing this has motivated me to exercise regularly, watch my diet and use some supplements such as cinnamon that are know to be useful in regulating insulin levels. I am one of the few members of my family who has not developed diabetes in midlife.

So, what about Cause of Osteopenia Genetics in your family?

1. If your parents or grandparents experienced broken bones or dowagers humps as they grew older, if you have narrow or light bone structure, you really need to pay attention to your nutrition, your weight bearing exercise and especially your Vitamin D uptake.

2. If you already have Osteopenia or Osteoporosis, you need to work extra hard and stopping and reversing your bone loss since it could be that you have a genetic predisposition toward excessive bone loss.

3. But, in addition to your own eating and exercise habits, you need to think of other family members. Do you have younger sisters or brothers? If so, maybe you should alert them so they discuss having a bone density screening with their physicians - since they too could have a genetic predisposition.

4. If you have children or grandchildren who are not yet in their thirties, they have time to work at building an extra strong skeletal system. Remember we usually are building excessive bone until our mid thirties. Nutrition, weight bearing exercise are especially important for those who are born into families with genetic predispositions towards thin bones.

To read about other causes of bone loss, click on Cause of Osteopenia

For information about Osteoporosis and Osteopenia Treatments click on:  Osteopenia treatments