Oscal - What does the research say?

There have been some scientific studies comparing Oscal to other calcium supplements.

1, The first study was by RN Johnson of the Department of Clinical Biochemistry, Green Lane Hospital, Auckland, New Zealand, was published in 1991 in the Eur Journal. Clinical. Nutrition .

The study included 12 healthy female volunteers and supplements providing 1 g of elemental calcium were given in random order at weekly intervals. “Using increments in urinary calcium excretion as an index of absorption, Calcium-Sandoz was absorbed best and Oscal the least.”

In addition, the researcher said that because of the significant sodium content in Calcium-Sandoz, this might not be the best supplement for those on a sodium limited diet. 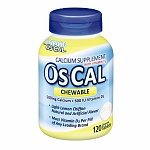 2. A second scientific study was published in the Australian New Zealand. Journal Med in April 1986.

The study said: “ There were no significant differences between the four preparations in the changes in parathyroid hormone (PTH) and urine hydroxyproline levels.  But the researchers found that Spar-Cal and Calcium Sandoz had more calcium absorbed than Oscal but that the latter had better calcium absorption than Ossopan.

There was a rise in urine sodium excretion which correlated with the indices of calcium absorption (r = 0.63, p less than 0.01) but not with the sodium content of the calcium preparations. This effect could be important, particularly in elderly patients on borderline sodium intakes.”

So what does all this mean? If you are concerned about calcium absorption, this may not be your best choice for a bone building supplement.

3. The supplement was also compared with Advacal in a number of studies and this comparison is  even more telling. It was tested against Advacal in multiple studies. Among those published studies, AdvaCAL participants typically reported statistically significant bone benefits; the others did did not.

It comes in many forms and packages

Is Oscal the best bone building supplement your money can buy?

To be honest I am not impressed with the research on this supplement.  Especially when I consider that  Professor Fujita has done numerous scientific studies of the calcium found in the supplement sold by Lane Labs called Advacal.

Advacal comes in many forms: Regular Advacal, Advacal Ultra, a special formula for men.  And what is reassuring is that this form of bone building calcium has numerous scientific studies showing its effectiveness.

If you want to read some of those studies, click on Advacal research studies

But if you just want more information, click on proven bone building supplement.,